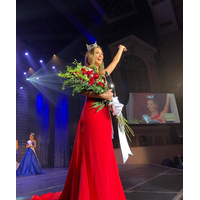 The Lexington resident and SCBIO associate received a $60,000 scholarship — the highest of any state pageant in the nation and $10,000 more than Miss America received last year. She will go on to compete in the Miss America pageant this September.

It was Nichols’ first appearance in the pageant — a rarity among Miss South Carolina winners.

“I’m just in shock right now,” she said. “I can’t believe it. This my first time ever competing in the Miss South Carolina organization. And I’m just so happy.”

Nichols lists as her platform a commitment to STEM – science, technology, engineering and mathematics – with a goal of convincing students to stick with those fields. She plans to seek her Master of Business Administration at Harvard.

Nichols, 22, was crowned by former Miss South Carolina Davia Bunch. Bunch, 22, received a $50,000 scholarship last year. She plans to complete her senior year at the University of South Carolina in political science and go to law school.

“There is just a lot of emotions,” Bunch said after relinquishing her crown. “I have gotten so close with all the girls throughout the year and am so proud of all of them.”

Talent carries the most weight at 35 percent, and the competition includes a large number of singers, dancers, baton twirlers and musicians. But during the preliminaries there were also speed painters (to both music and dialogue), monologues and clogging to soul and pop music (anything but bluegrass) and one contestant who “sang” in sign language.

Interviews count for another 35 percent and fitness and evening gowns/questions count 15 percent each. Thirty-five percent of a contestant’s composite score in the preliminaries is carried over to the finals.

This is only the second year of the sportswear competition since the Miss America organization dropped the swimsuit competition last year in a pivot called Miss America 2.0. The women and teens compete by performing an aerobic exercise.

In each category, the contestants are judged from 1 to 10 by five judges with the high and low scores thrown out. The preliminary scores will narrow the competition down to 15 finalists. A 16th, called the People’s Choice, is chosen by viewers of the pageant’s live streaming broadcast at miss-sc.org.