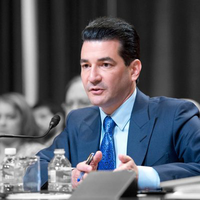 WASHINGTON, March 5 (Reuters) - U.S. Food and Drug Administration Commissioner Scott Gottlieb said on Tuesday that he plans to step down next month, a sudden resignation that calls into question how the agency will handle issues such as surging e-cigarette use among teens and efforts to increase competition in prescription drugs.

Gottlieb was well regarded by public health advocates and won bipartisan support for his efforts to curb use of flavored e-cigarettes by youths, speed approval times for cheap generic medicines to increase competition and bring down drug prices, and boost the use of cheaper versions of expensive biotech medicines called biosimilars.

Unlike his predecessors, who said drug pricing was not the purview of the FDA, Gottlieb waded into the intensifying debate about the high cost of medicines for U.S. consumers and had the agency actively looking into possible solutions.