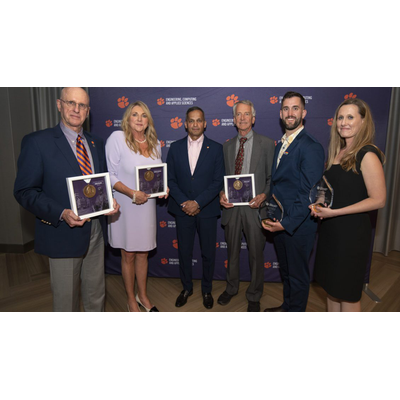 Andy Carr knows he has big shoes to fill, but after years walking alongside a legend in South Carolina manufacturing, he feels comfortable wearing them.

Carr led the S.C. Manufacturing Extension Partnership through the sudden death of its heart-and-soul CEO and president last fall and guided the organization as interim president while an executive search committee looked for someone to replace Chuck Spangler.

Carr was offered the job in February and took the title officially on March 7.

“Obviously we’re going to be informed by Chuck’s legacy,” Carr said of SCMEP’s plans to continue adapting to emerging manufacturing needs. “We have a great organization and a great culture here at SCMEP and that will continue. … The one thing that we do know is that change is continual. And the pace of change continually gets faster and that’s something that SCMEP will continue to do. There’s no such thing as standing still in manufacturing. You either move forward or backward, and we will continue to move forward and we’ll do that by making sure that we’ve got all the products and all the services — the things that South Carolina manufacturers need to be globally competitive. That’s what we’re all about.”

A native of Scotland, Carr worked for Lucas Industries in Birmingham, England — which he likened to the UK’s version of Detroit — a former heavy manufacturing stronghold that has struggled in recent decades. The company offered him a temporary position in the United States, and he moved to Greenville with Lucas Engine Management Systems, a six-month gig that lasted five years and eventually led him to jobs in Spartanburg and Fountain Inn before he joined the staff of SCMEP in 1988.

SCMEP is a nonprofit group that serves as a resource for manufacturing in much the same way state extension services help farmers, but with a focus on improving manufacturing processes and the business of manufacturing. Services range from competitiveness assessments to a wide selection of courses from cybersecurity to internal auditor training. These days, supply chain and workforce development challenges are top of mind for manufacturers, he said.

All of the SCMEP staff has a background in manufacturing, Carr said, which strengthens their position as an ally for industry.

“We are all ex-manufacturing people,” he said. “Our field team, everybody here, we’ve sat behind those desks, so we know the pressures and we know the challenges. And the key component there is always flexibility. You have a hard time dealing with manufacturing, of course, if you don’t have any degree of flexibility and adaptability. That’s what manufacturing is on a daily basis.”

SCMEP was borne out of a law pushed through by the late Sen. Fritz Hollings, D-S.C., establishing the national Hollings Manufacturing Extension Partnership, based at the National Institute of Standards and Technology. South Carolina’s program was one of the original three, according to the organization’s website.

A report based on client surveys puts SCMEP’s economic impact at $1.7 billion in retained and increased sales, $130.9 million in new client investments and $27.4 million in cost savings.

All of that happens, Carr said, by keeping up with the emerging needs of manufacturers.

“Those changes happen week to week, month to month, year to year, so we will continue to add those new products and services to make sure we have what South Carolina’s manufacturers are looking for,” he said. “We can always provide that assistance, that guidance, and continue to perform as trusted advisers for them.”