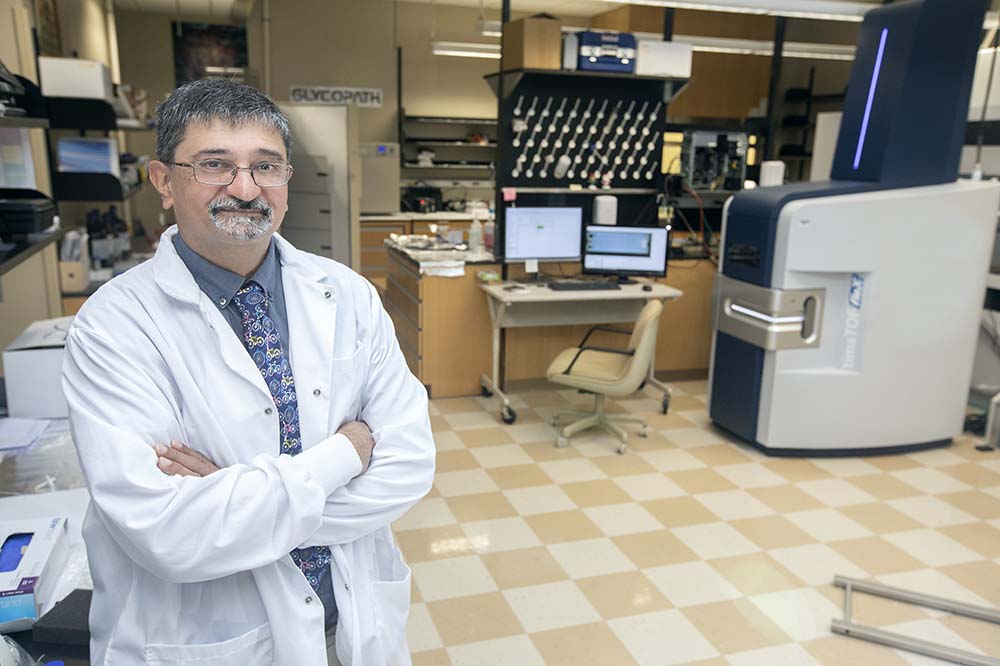 Anand Mehta, D.Phil., the SmartState Endowed Chair of Proteomic Biomarkers and an MUSC professor in the Department of Cell and Molecular Pharmacology and Experimental Therapeutics, has been named a fellow of the National Academy of Inventors (NAI). Mehta is one of 169 distinguished inventors to be named an NAI Fellow in 2022. Election into the academy as a fellow is the highest professional distinction awarded to academic inventors.

“I think it is an honor and, in some ways, a justification of the type of translational work our group has been doing for a number of years,” said Mehta. “All of us are in this business to help people, and this is a recognition of that.”

Founded to recognize academic inventors who have received patents from the U.S. Patent and Trademark office, the NAI fellows are expected to enhance academic innovation while also educating and mentoring students. The NAI Fellows Program spotlights academic inventors who have made a tangible impact on society through their prolific spirits of innovation. The program’s 1,567 fellows represent more than 400 universities and governmental and nonprofit research institutes. Collectively, they hold more than 53,000 issued U.S. patents, and their discoveries have generated over $3 trillion in revenue.

“I missed the email completely, as it came over the Thanksgiving holiday, and I was traveling. Several old colleagues of mine sent me emails congratulating me, and I was not sure what it was about! Once I was told exactly, I found the email and was very surprised and honored.”

To date, Mehta has been an author on over 100 peer-reviewed publications and awarded dozens of grants throughout his career. As a member of the International Society for Antiviral Research, American Association for the Study of Liver Disease and Society of Glycobiology, he continues to innovate in the field of proteomic biomarkers.

Jesse Goodwin, Ph.D., chief innovation officer at MUSC, pointed to Mehta’s remarkable capabilities and contributions. “Many of Dr. Mehta’s greatest qualities cannot be so easily quantified: his pragmatism, ability to problem-solve and his experience and vision in how to pull together industry and academicians in a way that meaningfully makes both parties better. His fellowship acceptance is well-deserved.”

A reflection of his research success, Mehta holds nine issued U.S. patents in the field of liver pathology, with several more patent applications currently pending. As an academic inventor who has published numerous peer-reviewed manuscripts, mentored dozens of students and commercialized technologies with multiple companies, Mehta has greatly contributed to the increase in quality of life, economic development and the welfare of societal.

“I have always believed in the value of translational science and the potential for ‘lab work’ to have a more meaningful clinical impact. I would not say that I ever set out to necessarily invent something but often you end up doing things because of curiosity or necessity.”

The 2022 class of fellows will be honored and presented their medals at the NAI’s 12th annual meeting on June 27, 2023 in Washington, DC. For the full list of inducted members of the MUSC chapter of the NAI, please visit our NAI page.