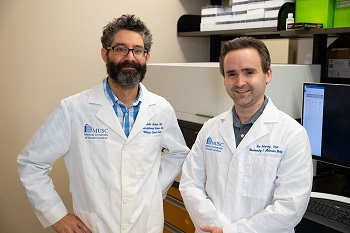 Delaney is one of 72 recipients of the NIH director’s New Innovator Award, which funds unusually creative early-stage investigators. The grant provides $453,000 annually for up to five years, which Delaney will use to investigate aneuploidy in ovarian cancer. The High-Risk, High-Reward Research Program, supported by the Common Fund at the National Institutes of Health, has awarded 103 new research grants to support highly innovative scientists who propose visionary and broadly impactful meritorious behavioral and biomedical research projects.

“The science advanced by these researchers is poised to blaze new paths of discovery in human health,” said Lawrence A. Tabak, D.D.S., Ph.D., who is performing the duties of the director of the NIH, in a news release. “This unique cohort of scientists will transform what is known in the biological and behavioral world. We are privileged to support this innovative science.”

The High-Risk, High-Reward Research Program supports investigators at each career stage who propose innovative research that, due to their inherent risks, may struggle in the traditional NIH peer-review process despite their transformative potential. Investigators seeking program support are encouraged to think beyond traditional bounds and to pursue trailblazing ideas in any area of research relevant to the NIH’s mission to advance knowledge and enhance health.

Delaney said he’s grateful that the NIH recognizes the need for such funding. “I’m very honored to get this grant and very excited that we can do this out-on-a-limb research to develop a new type of cancer drug for patients,” said Delaney, assistant professor in the Department of Biochemistry and Molecular Biology at the Medical University of South Carolina.

Despite advances in cancer research, many tumors become resistant to treatments, as cancer constantly mutates and evolves. Cancer therapeutics are generally designed to block one specific gene or protein needed for cancer cell survival, which initially causes tumors to shrink, leading to remission. However, some of the remaining tumor cells survive and thrive by bypassing the need for the blocked gene or protein, leading to patient relapse.

“Cancer is rarely cured by targeting single genes with drugs. We identified that a certain pathway, the cadmium response pathway, is commonly suppressed in 70% of high-grade serous ovarian cancers. This pathway gives us a unique opportunity for studying the biology of aneuploidy in cancer because all 11 genes in this pathway are located right next to each other on the same chromosome,” said Delaney.

Aneuploidy is the presence of too many or too few chromosomes in a cell, leading to diseases like cancer or disorders like Down syndrome. Although cancer researchers know that aneuploidy is a significant contributor to cancer genetics, studying this impact on cancer cells is challenging.

“Since aneuploid events in cancer alter hundreds of genes, it is very challenging to see which genes are causing cancer. Past cancer research has shown a lot of associations but not direct causations. Now we have a chance to hopefully establish clear genetic causation for a subset of ovarian cancers,” said Delaney.

High-grade serous carcinoma is the most malignant form of ovarian cancer and accounts for up to 70% of all ovarian cancer cases. This type of ovarian cancer is a perfect model cancer for studying aneuploidy, since it is one of the most aneuploid tumor types, Delaney said. There is also a great need for better treatments, as it is the fifth deadliest women’s cancer.

Previously, Delaney successfully established the role of aneuploid-suppressed autophagy as a treatment target in ovarian cancer. Building upon that foundation, this project aims to target all 11 metallothionein genes in the cadmium response pathway to overcome the mutational resistant mechanisms in ovarian cancer.

Using animal models, imaging and advanced biochemical techniques, Delaney’s laboratory aims to establish the metallothionein genes as tumor suppressors. “Since these genes are right next to each other on a single chromosome, we can alter that whole region at once to mimic aneuploidy. This way, we can mimic what happens when a cancer cell loses that particular chromosome. We will develop cell and animals models of the aneuploidy that occurs in cancer to answer critical basic science questions,” said Delaney.

The motivation for the first stage of this long-term project is the fascinating science, Delaney said. “The motivation comes from pure discovery.”

Ultimately, the goal is to develop metallothionein-loss-selective drugs to treat the larger percentage of ovarian cancer patients who lose the cadmium response pathway due to aneuploidy. He has been able to pursue this line of research, given the entrepreneurial culture at MUSC and Hollings that helps to drive the development of next-generation therapeutics.

“Research is a staggered process. Now I have a clinical trial in Hollings based on experiments I began 10 years ago. Hopefully, in another 10 years, we will begin clinical trials with this new research direction. We hope our out-of-the-box thinking will make a difference for cancer patients in the future,” said Delaney.

Although Delaney’s work is at the beginning of the drug discovery pipeline, the findings can potentially help patients in the near future. “Discoveries happen at every stage of the research process. The drug screen may identify specific chemotherapies that are better for ovarian cancer patients who have lost the metallothionein genes. In ovarian cancer, especially recurrent ovarian cancer, identifying which treatments are best, based on tumor characteristics, is a big deal, since choosing treatments can be like rolling the dice,” said Delaney.