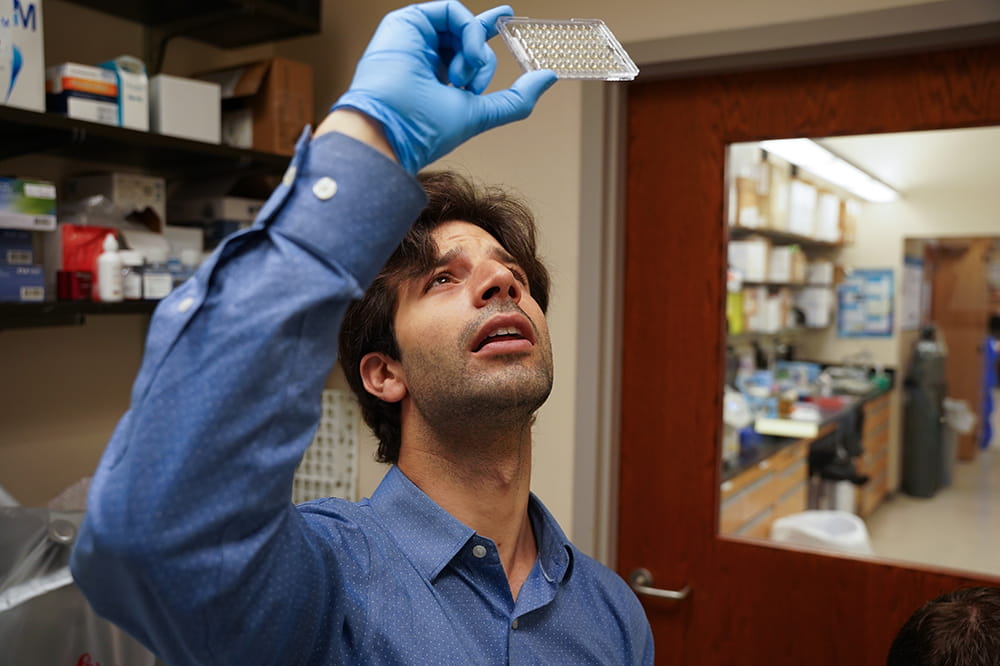 The grant means MUSC is one of the first three academic institutions to use Indee Labs’ Hydropore. The SBIR grant, which connects small companies and academic labs, provides Ferreira with $400,000, from July 1 through June 30, 2023, to develop new methods to modify the genome of regulatory T-cells for therapeutic purposes.

The immune system is a powerful defense against invading pathogens like viruses and bacteria. The Ferreira Lab explores ways to harness this dynamic system to develop therapies for autoimmune diseases, cancer and aging. In 2021, Ferreira was the first to publish findings on the use of a genetic manipulation technique called CRISPR Cas9 in human regulatory T-cells (Tregs). Tregs are a specialized type of anti-inflammatory T-cell that suppress the immune system to avoid damaging overactivation.

“The immune system is very powerful. We just have to direct specific immune cells to the right target and make sure that they are robust enough to overcome the target, such as overactive immune cells in autoimmunity,” said Ferreira, an assistant professor of microbiology and immunology at MUSC.

Tregs are the rarest type of T-cells, as human Tregs only make up about 1% of white blood cells. “Potentially promising clinical trials have been halted previously because the researchers could not get enough cells. The Hydropore can be a game changer for our preclinical and future clinical research. This device can be the difference between a patient getting treated or not, due to the inherent complexities of cellular therapies,” said Ferreira.

Hydropore is a non-viral delivery platform, which, currently, is available for research use only. This technology uses hydrodynamic conditions that can be coupled to a brief electric field to make cells permeable, gently, allowing for the quick and efficient delivery of, for instance, gene-editing complexes and nucleic acids into cells.

Gene manipulation has many basic science and potential clinical benefits. Adding or removing genes from cells helps researchers to discover the function of genes and their associated proteins. From the clinical perspective, gene manipulation lets scientists design T-cells that target other cells to treat or even potentially cure diseases. For example, in 2021, the Food and Drug Administration (FDA) approved T-cell-based gene therapies for the treatment of multiple myeloma.

Every cell is valuable when using a rare cell population such as regulatory T-cells. Due to their fragile characteristics, manipulating the genome of Tregs poses more challenges than other cells. Currently, genetic modifications with CRISPR Cas9 are performed using a technique called electroporation. This method zaps the cells with electricity to open small pores – allowing the new genetic material to enter the cells. While some cells handle this well, the Tregs’ growth is stunted after this process.

Inventions and pushing the limits have brought safe and effective gene editing closer to becoming a reality. “Thanks to CRISPR Cas9, genes can be inserted precisely at the right location in the genome, so there is no risk of dangerous off-target effects. Electroporation and similar methods have replaced the viral methods, so there is no virus in the cells that may be put into the patient. Now, the last hurdle to cross is getting the genes into the delicate cells. Indee Labs’ novel device may allow the researchers to cross that last hurdle,” said Ferreira.

“The new technology uses microfluidic vortex shedding, instead of simple electroporation, dramatically reducing the time and amount of voltage that cells are exposed to during gene modification. This has been shown to increase cell viability, reduce unwanted changes to the cell functions and result in greater cell growth and final cell numbers,” said Ferreira.

Ferreira’s passion for generating safe and effective cell-based therapies was born during his postdoctoral training at the University of California San Francisco (UCSF), where he connected with Indee Labs’ CEO Ryan Pawell. Pending a successful year with the current preclinical Phase I SBIR grant, Ferreira and Indee Labs will compete for a Phase II SBIR grant to continue developing this project’s scientific and clinical potential.

“This type of startup industry-academia collaboration, powered by Indee Labs and MUSC and supported by the NIDDK SBIR grant, will expedite both basic scientific discovery and bench-to-bedside translation. We’ll work closely together sharing reagents, co-developing Hydropore protocols and analyzing the results,” said Ferreira.