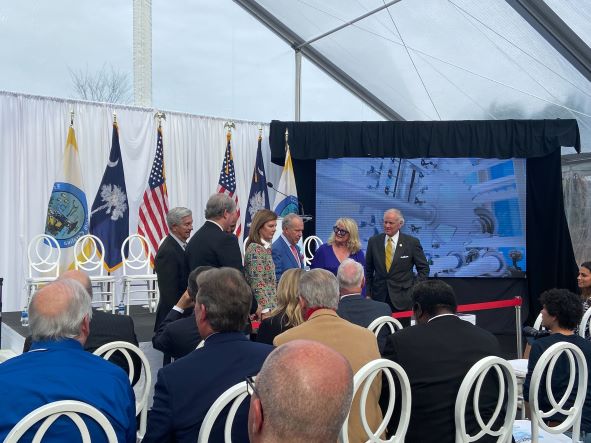 A Lexington County drug maker has cut the ribbon on its latest venture — a medical glove plant.

As Nephron CEO Lou Kennedy spoke, videos played of 13,000 hand-shaped molds dipping in and out of vats that hold the chemicals needed in the gloves’ production.

When fully operational, the plant will have the capacity to produce 2.1 billion gloves per year, Kennedy told the crowd. It will employ some 250 people, the company said when the plant was first announced.

The manufacturing plant is the length of six World Cup soccer fields, Kennedy said, rattling off statistics. Two large water tanks, each of which could fill an Olympic-size swimming pool, store water on site necessary to glove production.

Nephron Nitrile is one of 23 potential new medical glove plants announced in the United States since the COVID-19 pandemic. It is one of only six expected to actually open, a number that could drop to three, Kennedy said based on information from suppliers.

That includes another South Carolina glove plant planned by Health Supply US in Greenville County. The company said in a press statement it would invest $150 million and add 600 new jobs over the next five years. That plant would produce 4.3 billion nitrile gloves per year.

It’s an industry where margins are tight. Nitrile gloves typically go for $3 to $4 per box wholesale. At the height of the pandemic, Kennedy said Nephron Pharmaceuticals was spending $30 per box amid supply shortages.

It was those supply shortages that Kennedy said inspired Nephron Nitrile to produce gloves in the United States rather than relying on manufacturers in countries like China and India, Kennedy said.

Nephron has been on a growth wave in recent years, building out its sprawling campus to add production of at-home COVID-19 test kits, a new 110,000-square-foot wing where it will begin making chemotherapy drugs and a number of antibiotics, a new 200,000-square-foot warehouse where it plans to fill vaccines, and a new subsidiary that will make a portion of the medical devices and packaging that Nephron previously contracted out.

But the company has also found itself at odds with federal regulators.

In late October, the U.S. Food and Drug Administration issued a warning letter to Nephron saying it had not gone far enough in its response to concerns raised during an annual inspection.

As a result of that inspection, Nephron has recalled at least 3.9 million doses since May.

In its letter, FDA officials cited issues with different drugs getting mixed together, causing cross-contamination, during the manufacturing process and rehashed concerns raised during the nearly month-long inspection this spring related process meant to ensure the pharmaceuticals produced are sterile.

Sterility assurance refers to the probability that bacteria, viruses or other microorganisms are unable to survive the sterilization process. Federal regulations require that drug makers demonstrate a certain level of confidence in the sterility of their products.

Kennedy told The Post and Courier that the recall was “almost over” and repeated previous statements that the recalled drugs were “not harmful to patients.”

Kennedy joked to the crowd that the FDA had moved quickly to approve vaccines during the pandemic.

“Now if I could just get them finished up with me right now,” she said.

Kennedy told The Post and Courier that FDA officials were actually on site during the ribbon cutting as part of the close-out process to the earlier warning letter.