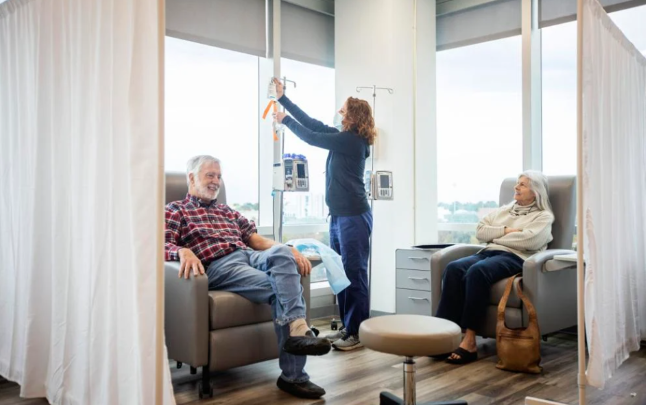 Dr. Ken Hewett, 73, of Mount Pleasant paused thoughtfully as he considered whether he has seen any change during a much-heralded clinical trial for a new drug to treat early Alzheimer’s disease.

“It may be helping a little bit, lowering the downward decline,” said the retired assistant professor of pediatric cardiology at Medical University of South Carolina.

“I think he has been quite stable,” said his wife, Mary, also a retired assistant professor in health professions education at MUSC.

Hewett was part of a trial for the drug lecanemab, whose results were released late Nov. 29 and appear promising to researchers and advocates. Those on the drug had 27.1 percent less decline on cognitive testing compared to those on placebo over an 18 month period, according to the study published in the New England Journal of Medicine.

Additionally, those on the drug had a significant reduction in amyloid beta protein congregations in their brains — which is thought to cause or contribute to the disease — compared to those on placebo, the study found.

And that is what makes this drug so different, said Dr. Jacobo Mintzer, who is principal investigator for the Charleston arm of the drug studies at the South Carolina Institute for Brain Health at the Ralph H. Johnson VA Health Care System.

“It is very thought-provoking that this compound appears to have shown a clinical and biological effect that correlate with each other,” he said. “And many other compounds did not.”

The Alzheimer’s Association called on the Food and Drug Administration to accelerate approval of the drug based on the results of the worldwide study, known as CLARITY AD.

“These peer-reviewed, published results show lecanemab will provide patients more time to participate in daily life and live independently,” the association said. “It could mean many months more of recognizing their spouse, children and grandchildren. Treatments that deliver tangible benefits to those living with mild cognitive impairment due to Alzheimer’s and early Alzheimer’s dementia are as valuable as treatments that extend the lives of those with other terminal diseases.”

Amyloid precursor protein is a necessary component of brain functions, but when it is cut incorrectly it can create a sticky protein that then creates long chains that can congregate into larger plaques in the brain. Those plaques are a hallmark of Alzheimer’s disease. Previous studies succeeded in removing some of those plaques but it did not help with cognition, said Dr. Olga Brawman-Mintzer, co-director of the brain institute at the Charleston VA.

“So we started saying, ‘Are we catching it too late?’ Maybe we should start with people way earlier,” she said.

Lecanemab is a monoclonal antibody, a drug that specifically targets that sticky amyloid protein chain, a much earlier stage than other drugs that targeted the larger plaques. And that appears to be the difference, because that earlier stage is when the amyloid formations are beginning to attach to the membrane of the brain cell, Mintzer said.

“And that’s what really destroys it,” he said, which is why later interventions might not restore function.

It could also explain a major side effect of the drug, which appears to cause small bleeds in the brain of some patients. Those small bleeds occurred in 17.3 percent of patients who got the drug and in 9 percent of those who got placebo, while both drug and placebo patients had similar amounts of brain swelling, the study found. The amyloid protein likes to adhere to small blood vessels in the brain so removing it likely weakens the vessel walls and the resulting bleeding shows the drug “is actually working,” Mintzer said. Adverse reactions serious enough for the patients to quit the study occurred in 7 percent of patients getting the drug and 3 percent of those getting the placebo.

But for Mintzer, who got his first grant from the Alzheimer’s Association in 1985, the drug appears to be a goal he has pursued his whole career.

“Before retirement, to be part of a study with a drug with high hopes, and that can actually have a real effect, to do it in our communities, is something that I was not sure I was going to get to see,” he said.

And it continues. Hewett began the CLARITY AD study about two years ago. He doesn’t know if he got the drug or placebo because the study is double-blinded, meaning the patients and those administering the study drug don’t know which one the patient is getting until after the trial ends. But he didn’t have any side effects, Mary Hewett said.

“It’s been smooth,” she said. “We haven’t encountered any adverse reactions to anything.”

Hewett is now on an extended part of the study where he will receive the drug so that researchers can continue to evaluate its effectiveness and safety, data that can then be reported to the FDA.

It is something Hewett does with his memory constantly.

It is all “very subtle, even now,” Hewett said. He thinks his memory problems began a couple of years ago but it is much longer, his wife reminds him. Ken Hewett is surprised that he took part in another clinical trial with a different drug five years ago, thinking it was more recent than that. He gives his age as 67 but his wife laughs gently and reminds him he will be 74 next year.

But they have yet to see all of the other things that can happen later with Alzheimer’s disease, such as agitation, wandering off, or being unable to perform daily tasks such as dressing himself, Mary Hewett said.

“Maybe it is wishful thinking but I don’t think we are in that different of a place now as we were when we started this,” she said.

“I still forget things,” Ken Hewett said. Then he laughed, “But I forgot things 30 years ago, too.”

“You forgot things when I first married you, too,” Mary Hewett said, laughing with him.

“But then you married me anyway,” Ken Hewett said. “That’s the kind of person you are.”