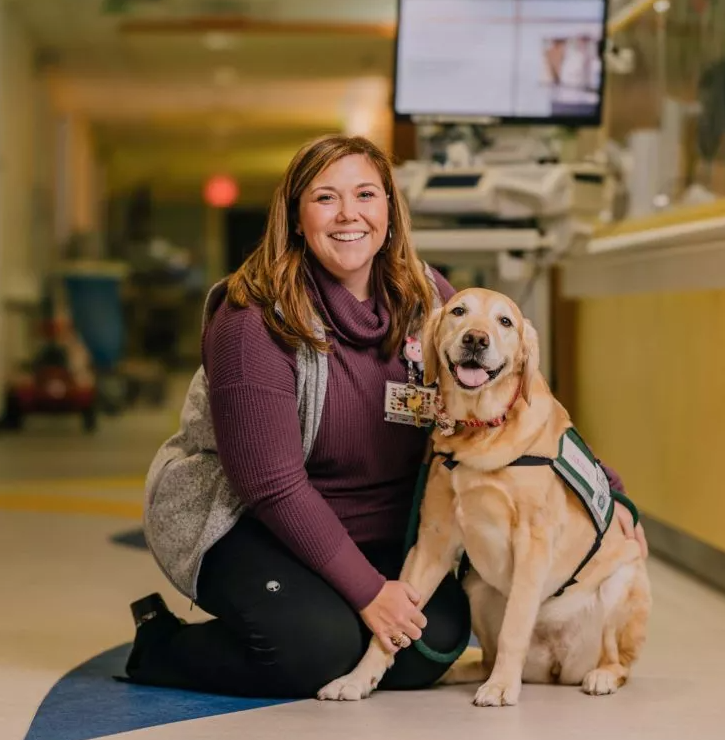 Compliments of the Greenville Journal

For almost anyone, a trip to the hospital can be a scary and stressful ordeal, but a team of dedicated professionals at Prisma Health help make that experience much less frightening.

This team’s members aren’t defined by an exhaustive list of specialized medical training and credentials, but are instead known by their kind eyes, wet noses and soft fur.

Prisma’s Canine FETCH (Friends Encouraging Therapeutic Coping and Healing) Unit has been making sure “the hard parts aren’t so hard” for patients and staff since 2016, according to unit coordinator Katelyn Leitner.

Unlike other service dogs that are trained to help a specific individual, Prisma’s facility dogs are chosen, in part, for a gregarious nature and social adaptability in order to work in a variety of environments and situations and to meet the needs of patients confronting a range of procedures treating a wide variety of health conditions, Leitner says.

In addition to being the unit’s coordinator, Leitner is a handler who is partnered with Kalle, a 7-year-old golden retriever-Labrador mix, whose gentle disposition and readily shared affection bring a different kind of healing to patients and staff.

Leitner and Kalle can most often be found in the inpatient units of Children’s Hospital or visiting patients on pediatric floors and in the hematology/oncology unit. In this role, Kalle and the other facility dogs help children and their families through some of the most stressful situations, like blood draws or infusions or through lengthy and sometimes noisy tests like EEGs or MRIs.

Leitner says one of her and Kalle’s most important roles is helping patients feel safe. Also, showering Kalle or one of her canine coworkers with affection can often lower a patient’s anxiety by giving him or her something much more warm and furry to focus on.

“When I’m meeting kids, I say my job is to make sure the hard parts are not so hard,” Leitner says.

For Dr. Robin LaCroix, medical director for Prisma Health Children’s Hospital, the work of the Canine FETCH Unit is of material benefit to improving outcomes.

The dogs’ “bringing some sense of normalcy when nothing looks, sounds or feels normal” is tremendously beneficial, LaCroix says.

Jovi Bull can attest to the amazing impact the facility dogs have on the patients with whom they work. Bull’s 9-year-old daughter, Caroline, has had to cope with a beleaguering number of tests and procedures for years to treat an ongoing variety of health conditions.

Helping Caroline through a great many of those procedures was Vivitar (Vivi), the goldendoodle who was the Canine FETCH Unit’s first facility dog.

Bull says that as a lifelong dog person, her daughter’s connection to Vivi was immediate when they first met in 2017.

“It was love at first sight,” she says. “There was just this incredible bond — I can’t explain it.”

Because Caroline had to undergo so many different tests and procedures and was frequently in units or facilities where Vivi wasn’t working or couldn’t go, a nurse gave Caroline a stuffed toy “Vivi” complete with the emblematic green vest of all the facility dogs. Bull says the toy helped her daughter through many situations where the real Vivi couldn’t be with her, and that made everything easier.

That toy has added significance now after Vivi herself lost her battle with cancer earlier this month. Bull and her daughter, along with countless other patients, their families and hospital staff are part of an outpouring of love and sorrow honoring Vivi.

“She wasn’t just a dog… she was so much more than that,” Bull says. “She was a precious soul. She was an angel.”

Bull says although her family misses Vivi desperately, they know the FETCH dogs and their handlers will continue Vivi’s legacy of love and compassion in helping patients and their families on the path to healing.

“They’re a medicine of their own,” she says.