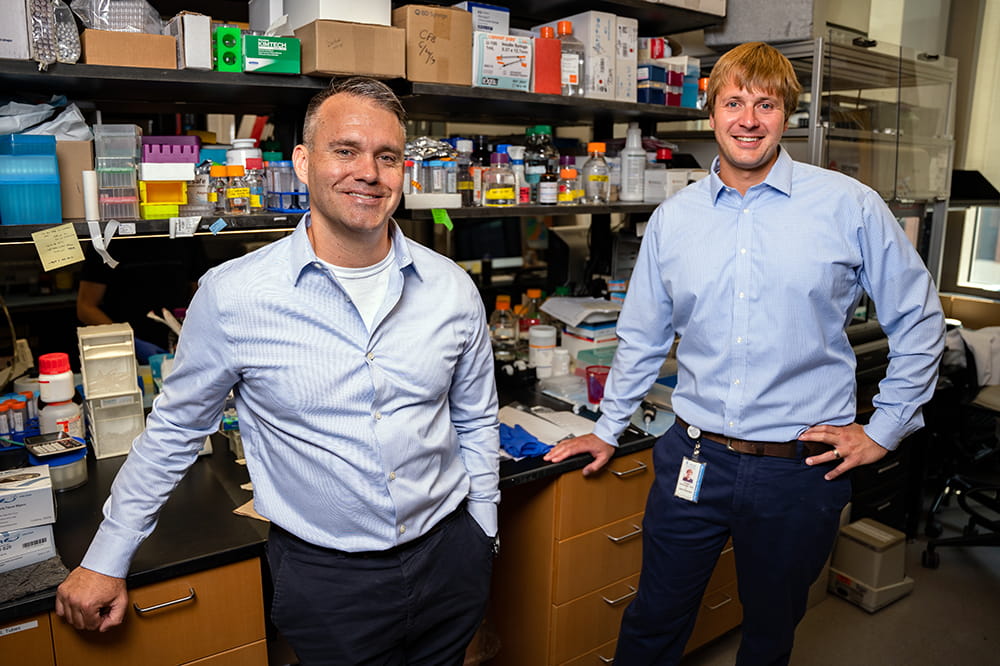 As he finishes up his postdoctoral fellowship, Reeder Robinson, Ph.D., could be among the hundreds of scientists competing for precious few assistant professorship openings across the nation. But instead of zigging, he’s zagging.

Robinson, who works in the lab of MUSC Hollings Cancer Center researcher Nathan Dolloff, Ph.D., is among the first group of researchers to be awarded a Small Business Transition Grant for Early Career Scientists, a new grant with the intention of building entrepreneurship among young scientists while under the mentorship of a senior faculty member. He’ll continue to work with Dolloff at MUSC for one year and then have the option to transition to the company Dolloff founded, Leukogene Therapeutics Inc., as they work toward commercializing cancer treatments.

His story is an illustration of the push toward entrepreneurship that’s happening at Hollings, encouraged by the National Institutes of Health’s interest in translating basic discoveries into new treatments for patients and doctors.

Dolloff is a key part of the entrepreneurial focus at Hollings. He holds a leadership role within the cancer center, encouraging and supporting other researchers as they step out onto the entrepreneurship path. Internally, he works with the research programs and the Transdisciplinary Cancer Teams to identify and support research projects with potential for product development. The ultimate goal is to establish a pipeline that will fuel new clinical trials at Hollings. One path is to feed those into the Rapid Translational Working Group, which includes the Clinical Trials Office, statisticians, trialists, disease focus groups and people experienced in protocol development, all with the aim of helping researchers here to get their own clinical trials started.

He also serves as a bridge between Hollings and the MUSC Office of Innovation, the Zucker Institute for Innovation Commercialization at MUSC (ZI) and SCbio, the South Carolina Biotechnology Innovation Organization, a statewide public-private group dedicated to building the life sciences sector in South Carolina.

Denis Guttridge, Ph.D., associate director for translational science at Hollings, noted that entrepreneurship has been a strength of Hollings members for some time. Nancy Klauber-DeMore, M.D.; Richard Drake, Ph.D.; and Besim Ogretmen, Ph.D., are among the members who have companies dedicated to commercializing potential treatments that they’ve developed in the lab. But with Dolloff’s new charge to spread this entrepreneurial energy throughout the cancer center, Hollings is elevating this focus centerwide.

Dolloff is excited by the enthusiasm for entrepreneurship among so many faculty members and leadership.

He said that entrepreneurship is a vital connection point between discoveries in the lab and their translation into FDA-approved products that can affect the lives of patients.

“The science has to be very good. That comes first, but then there’s this huge gap between the bench science and ‘How do you make a molecule that’s an actual product that comes in a pill or a vial that you would see in a pharmacy?’” Dolloff said. “There’s that gap between where we are in academia and where we want our research to go.”

Because drug development is expensive, large pharmaceutical companies often don’t want to take a chance on a product that’s still early in development.

“I think there is a misconception that we’ll publish a paper and big pharma will swoop in, license our work and start clinical development. It happens sometimes, but it’s very rare,” Dolloff said. “Much of what we do is still too early and risky to them, and so, there’s a long runway ahead of that really great paper or new grant.”

Most scientists, though, don’t want to stop at interesting findings – they want their research to actually help people. And that is part of Hollings’ mission.

“The early work is critical, but we don’t want to stop there,” Dolloff said. “As an NCI-designated cancer center, Hollings is tasked with reducing the burden of cancer in the state of South Carolina and beyond.”

“That’s where startup companies and small business funding come in. They can serve as commercial vehicles to raise funding and bring people together from inside and outside of the academic institution, with the goal of conducting the development work that wouldn’t traditionally be done in a university lab,” he said. “It’s a great model that benefits the university, and the faculty member gets to see their research move forward in a translational way.”

Dolloff founded Leukogene Therapeutics Inc. in 2012 with seed funding from a Small Business Technology Transfer grant provided by the National Cancer Institute. The company has been awarded six small business awards from the NCI since then for multiple projects, including the development of a small molecule inhibitor for treatment-resistant multiple myeloma and large molecule therapeutics for multiple targets such as pancreatic cancer and acute myeloid leukemia.

Guttridge said that Dolloff’s experience in this space positions him well to lead Hollings’ efforts.

“He’s the perfect person to basically teach the rest of us Ph.D.s or clinicians who really believe in translating our science but don’t know how to do it very well,” Guttridge said.

Already, Dolloff has taken the lead in reviewing submissions for a new award, the Entrepreneurial Sciences in Cancer Award (ESICA), co-funded by Hollings, the MUSC Office of Innovation and ZI to encourage entrepreneurship among faculty. The award focuses on creating new intellectual property or strengthening existing intellectual property that has a good chance for reaching commercial development.

The first two awards, distributed in the spring and summer of this year, went to Hollings researchers Philip Howe, Ph.D., for research focusing on developing therapeutics aimed at a protein involved in breast cancer metastasis, and John Wrangle, M.D., for antibody therapeutic development for a new immunotherapy concept in solid tumors.

Dolloff noted that thinking like an entrepreneur is beneficial, not just for faculty members but for the early-career researchers who work under their guidance. Not everyone who earns a doctorate will want a faculty position – and for those who do want to work in academia, there simply aren’t enough faculty positions to go around.

“Providing them with alternative career paths is important.” Dolloff said. “Earning the Ph.D. is the first step, and then it’s about finding your calling in a career path where you can be successful and happy and contribute to your community in a productive way.”

Robinson, the senior postdoctoral fellow, is one example. By working at Leukogene with Dolloff, he’s choosing a path that will continue to contribute to cancer care – in the academic setting and possibly beyond.

“The ultimate plan is to commercialize the product,” Robinson said. “The hope is by the end of the grant to have a commercialization partner, a licensing partner, and they can help develop it and get it into phase one clinical trials.”